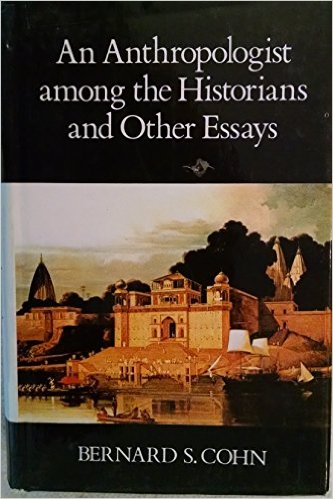 Bernard Cohn, An Anthropologist among the Historians and other Essays. Oxford University Press, 1998.

“History and Anthropology: The State of Play”

“The Pasts of an Indian Village”

“The Census, Social Structure, and Objectification in South Asia”

Bernard S. Cohn (1928-2003) was born in New York, received his Bachelor’s of Arts in History from University of Wisconsin Madison (1949), and his Ph.D. in Cultural Anthropology at Cornell University in 1954. His Ph.D thesis is titled “The Camars of Senapur: A Study of the Changing Status of a Depressed Caste.” Primarily based out of the Anthropology department at the University of Chicago, Cohn also held the following positions: research assistant specialist with the US Army in Fort Beginning Georgia from 1954-1956, chair Anthropology at University of Rochester 1960-1964, and chair of the Anthropology department at University of Chicago from 1969 to 1972. In 1998 Cohn was elected to the American Academy of Arts and Sciences, one of the oldest and prestigious honorary societies in America.

Cohn’s contributions include new perspectives on India’s caste system, a critical study of colonial knowledge gathering, the development of historical anthropology, and his intellectual mentorship of a community of S. Asia specialists such as Dipesh Chakrabarty, Nicholas Dirks, and Ronald Inden. Cohn’s argument regarding the caste system emphasizes how the caste system developed new meaning within the colonial context. He explains that British laws and attempts to codify caste intensified the hierarchical structures of caste. His volume Colonialism and its Forms of Knowledge (1996)—a collection of four essays produced during the 1980s—centers around the project of colonial knowledge making. Cohn connects colonialism to practices of information gathering and the standardization and simplifications of social, cultural, and religious codes.

Cohn was also the first American historian to write for the Subaltern Studies volumes. Cohn’s most notable works are India: The Social Anthropology of a Civilization (1971), An Anthropologist among the historians (1987), and Colonialism and its Forms of Knowledge (1996). The three concepts I would like to focus on for this presentation are Cohn’s idea of historical anthropology, social structures within a colonial context, and conclusions regarding rural structural change.

Towards an Anthropological History of Colonial Contexts and Social Change

In “History and Anthropology: The State of Play,” Cohn lays out the fundamental differences, similarities, histories, and critiques of the disciplines of anthropology and history. Using the caricature of Philias Fillagap and Lucy Lacuna, Cohn demonstrates how anthropology seeks to uncover deep symbolic and functional structures. Cohn mentions the two anthropological lenses of culture—Victorian evolution (unity of mankind) and Boasian culture theory (diversification). Furthermore, Cohn explains how beginning during World War II, American anthropology became tied within national projects of understanding ‘the enemy.’ For anthropology, the 1950’s shifted towards studying villages and the 1960’s saw the growth of graduate training in the social sciences. The pursuit of authentic social facts within anthropology leads to the critique that anthropology is analyzed ‘out of time’ and positivistic in its attempt to classify and ‘fill a gap’ of objective social facts.

While anthropology is situated in space, history examines time. Cohn demonstrates the historian’s veneration of the archive and paper in a similar way as the anthropologist’s depiction of fieldwork as rites of passage. While anthropology is concerned with structures, history is interested in ‘the road to,’ or explanatory understandings of watershed moments and temporally bounded change. Cohn concludes his analysis of history with observations of social, proctological history ‘from below.’ He argues that this shift towards structures and systems of control brings history back to its primary contributions—the study of culture, symbols, and meaning.

Calling for an ‘anthropological history’, Cohn argues that the object of study should be cultural such as concepts of honor, authority, power, codes of conduct, systems of social classification, and the construction of time and space. In this way, both anthropology and history can benefit from a more integrated study that examines how people construct cultural categories rather than of simply places and times.

Cohn applies anthropological history to his study of social structures within a colonial context. Cohn’s analysis of culture draws from Clifford Geertz’ concept of culture as a “historically transmitted pattern of meanings embodied in symbols, a system of inherited conceptions expressed in forms by means of which men communicate, perpetuate, and develop their knowledge about and attitudes toward life.” (Cohn 224)

Within “The Pasts of an Indian Village” and “The Census, Social Structure, and Objectification in South Asia” Cohn questions how Indians create and define a meaning of self. For “The Past of an Indian Village”, Cohn takes an ethnographic approach to examine how the Senapur village thought about their different pasts historically. Cohn examines the Thakur, Chamar, Brahman, Telis, and Muslims to demonstrate the variations in how groups understood their traditional and historic pasts. For example, Cohn explains how the Telis low caste of shopkeepers and traders drew a traditional past around their lost of status due to a militant defense of Hinduism in face of Muslims. In comparison, Telis marked two historic ‘pasts’ associated with their late 19th century prosperity and their identification with Mahatma Gandhi and the national movement. This focus on religious, cultural, social, and political concepts of a past thus moves away from anthropology’s objectification of culture and into a complex study of concepts over time.

Cohn continues to study the constitution of cultural identity in “The Census, Social Structure, and Objectification in South Asia.” Analyzing the British colonial census, Cohn demonstrates how the process of compiling and categorizing information provided an “arena for Indians to ask questions about themselves.” (Cohn 230) It is through this reflexive act—rooted in the political and economic contexts of colonial information gathering—that Indian enumerators began a process to situate and present their identities within the sphere of political legibility. Cohn highlights the challenge of representing caste in particular and argues that later understandings of caste were built upon census operations of interpretation and categorization.

From the three chapters Cohn demonstrates how an anthropological history can reveal conclusions about historical change in colonial contexts and around understandings of tradition versus modernity. For example, after analyzing the various ‘pasts’ of the different groups in Senapur, Cohn concludes that a society is ‘modern’ when it has shared understanding of a ‘past’ that can be used on a national basis to understand and explain behavior. This observation only emerges after his rigorous historical work of tracing social change and construction of a past narrative through time. In his chapter “Structural Change in Indian Rural Society 1596-1885” Cohn asks the question: what happened to controllers and cultivators of land dispossessed by the new groups who obtained absolute property rights through auctions? Cohn traces the relationship of Rajput clans, changes in land rights, and the roles of the zamindar landholders over a three hundred year time span. Within this period he undermines the generalization that British systems of land control wholly destroyed the land holding structures of pre-modern India. He demonstrates the nuances of how ex-zamindars often stayed on their previous property after the purchase of the land by another. In this way, Cohn disaggregates the ‘structural change’ experienced by traditional zamindars—while their ‘legal’ position changed with absolute property rights, their economic, social, and political positions were not always wholly transformed.

Cohn’s conclusion on how to study social change parallels his call to action in “History and Anthropology.” He argues that social change must not be understood within a closed system of winners and losers. Instead, by an anthropological history of social change, we can understand the bottom up, process of construction and systems of power over time.

2 thoughts on “BOOK REVIEW: Bernard Cohn’s An Anthropologist Among Historians”

Cindy Nguyen is a Postdoctoral Fellow in International Humanities at Brown University. She earned her Ph.D. in History at University of California, Berkeley (2019). She specializes in the history of Vietnam, Southeast Asia print culture, and libraries. Her book manuscript, "Reading and Misreading: The Social Life of Libraries and Colonial Control in Vietnam, 1865-1958" examines the cultural and political history of libraries in Hanoi and Saigon from the French colonial period through to the decolonization of libraries.